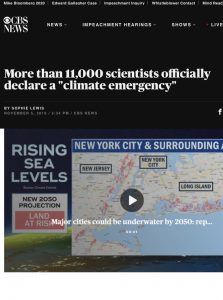 But before you jump off a cliff, read this Washington Times report a few days later (11-11-19):

There was something goofy about the petition signed by 11,258 “world scientists” from 153 countries declaring a “climate emergency.”

One “scientist” was named “Mouse, Micky” from the “Micky Mouse Institute for the Blind, Nambia.” Another was Albus Dumbledore, headmaster of Hogwarts. And then there was “Araminta Aardvark” from the fictional University of Neasden.

Among the “Alliance of World Scientists” members who were apparently real people, many identified themselves as teachers, students, administrators, statisticians, economists, technicians, therapists, doctors, psychologists — not climate scientists….

The alliance is a project of the Oregon State University College of Forestry, which invited “all scientists” to add their names to the four-page statement, “World Scientists’ Warning of a Climate Emergency,” by clicking on a green “sign the article” button on the college’s website.

One might think that such an apocalyptic warning would deserve some fact-checking before the Establishment mass media gave it headlines.  Not so.  The very same day the article appeared in the journal BioScience, the Oregon State University authors’ claims were repeated by CBS News above, Newsweek, Business Insider, msn.com, The Washington Post, and undoubtedly more.

Which points to a truly serious threat — a threat to our freedoms from this Establishment-promoted scam.   (Please see our previous posts on the climate-change topic, e.g.: “Fool Me Twice,” “Repeat a Lie Often Enough,” and “UN Climate-Change Hysteria.”)

Indeed, the Establishment’s Council on Foreign Relations has long promoted the crisis.  According to CFR.org:

Climate change poses grave risks to humanity in the 21st century; confronting it will require a massive transformation of the world’s energy systems. 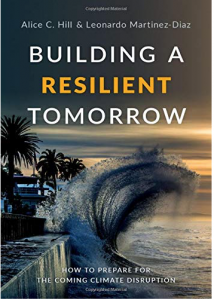 The CFR website also heralded a new senior fellow for climate change — Anita C. Hill:  “At CFR, Hill is researching and directing a roundtable series on preventing and mitigating the consequences of climate change.”  Although the Council claims to take no “official” policy positions, it clearly promotes an agenda.  Hill recently co-authored a book — Building a Resilient Tomorrow: How to Prepare for the Coming Climate Disruption.

The CFR maintains links with the workhorses of the environmental movement, such as the Environmental Defense Fund. (See our website review of Steve Milloy’s Green Hell).  And CFR members have huge influence in the media.

More problems with the CBS report
The CBS report not only repeated the claims in the BioScience article, but added its own support for alarm.

At the opening of the CBS report, a graphic points to a “new 2050 projection” suggesting that major cities could be underwater by 2050, including “New York City & Surrounding Areas.”

Dr. Arthur Robinson, publisher and editor of the newsletter “Access to Energy” has researched the climate-change topic extensively.  In his July newsletter, Dr. Robinson provides historical graphs of glacier shortening and hydrocarbon use with these comments:

Glacier melting and sea level rise as the Earth emerges from the Little Ice Age are seen to be approximately linear and starting long before significant carbon use.  Moreover sea level rise is proceeding at a rate of seven inches per century — hardly a serious threat. 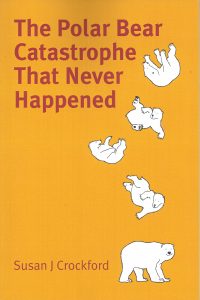 The CBS report also overlayed a photo of polar bears with the text “11 species threatened by climate change” linking to photos of the 11 species.  However, the previously alleged impact on polar bears has been credibly debunked by Dr. Susan Crockford, an adjunct professor at the University of Victoria, British Columbia, in her 2019 book, The Polar Bear Catastrophe That Never Happened.

Two of six recommended categories of action taken from the BioScience article were:  1) Implement a carbon-free economy and prioritize basic human needs rather than affluence.  And 2) stabilize and reduce population growth.  Both are prescriptions for more unconstitutional socialist power.

Mitigating and adapting to climate change while honoring the diversity of humans entails major transformations in the ways our global society functions and interacts with natural ecosystems. We are encouraged by a recent surge of concern. Governmental bodies are making climate emergency declarations. Schoolchildren are striking. Ecocide lawsuits are proceeding in the courts. Grassroots citizen movements are demanding change, and many countries, states and provinces, cities, and businesses are responding.

Among the article’s cited reviewers, we find Dr. Paul Ehrlich, author of the 1968 bestseller, The Population Bomb.  Dr. Ehrlich is well known for predicting crises that never happen.

Fatih Birol, the head of the International Energy Agency (IEA), faced renewed pressure on Monday from investors and scientists concerned about climate change to overhaul the agency’s projections for fossil fuel demand.

Pension funds, insurers and large companies were among 65 signatories of a joint letter to Birol, seen by Reuters, urging him to do more to support the implementation of the 2015 Paris Agreement to avert catastrophic global warming.

“The year 2020 marks a turning point for the world — the year when we either grasp the challenges and opportunities before us, or continue delaying and obstructing the low-carbon transformation,” the letter said.

The media regularly ignore the fact that alternative energies, such as solar and wind power, simply cannot supply the needs of a modern industrial society, let alone economically.   So implementation of alternative energies requires government pressure and subsidy and would eventually lead to rationing.   Which makes one wonder whether the investors are really concerned about climate change or merely their speculative investments, i.e., speculating on the success of Establishment-supported environmental activism.

However, the media agenda is clear:  Support a revolutionary drive for more government power that would make slaves of us all.

One response to “Crisis-hyping — What’s at Stake!”