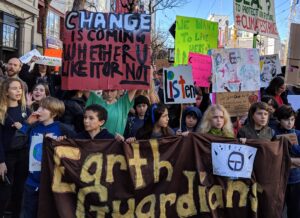 Tens of thousands of high school students in cities nationwide plan to skip classes Friday [9-20-19] to attend Global Climate Strike marches calling for immediate action to end climate change. They will be part of a global joint protest aimed directly at the adults who they say are ignoring the destruction of the planet….

Students in more than 800 locations around the United States plan to go on strike from school for the day to attend protests. “It’s going to be a really, really powerful day, the launch of a new era of climate movement. This is just the beginning for us,” said Katie Eder, 19, who is the executive director of the Future Coalition, a youth-led non-profit helping the groups coordinate….

The protests are timed to begin a week of activism at the United Nations, including a Youth Climate Summit on Saturday and a UN Climate Action Summit on Monday. A second strike is planned for Friday, Sept. 27. — USA Today, 9-19-19

Media reports on the youth demonstrations conveniently ignore the revolutionary orchestration guiding the protesting students (e.g., the radical professors and/or outside adult revolutionaries — with subversive aims — motivating and guiding student action.)  By themselves, high school kids clearly don’t have the connections, independent funding, and experience to organize nationwide, let alone global demonstrations.  However, by ignoring the orchestration, the media helps create the illusion that the protesting students represent the genuine concerns of today’s responsible students.

And, of course, the reports completely ignore the subversive aims driving the “climate change” hysteria — unaccountable global power over you and me. That is the most important lesson for Americans to grasp.

More Americans also need to understand how they are being deceived. An old adage states:  “Fool me once, shame on you, fool me twice, shame on me.”  But how about “fool me a hundred times?”  Then we have a real problem.  The recent student demonstrations illustrate a shop-worn but proven revolutionary tactic for pushing totalitarian measures through a national legislature.

Revolutionary Parliamentarianism
In a secret Communist strategy paper, Jan Kozak, official historian for the Communist Party of Czechoslovakia, provided a thorough explanation of the tactic as it was used in the Communist takeover of Czechovakia following World War II. His original Czech paper was titled: “How Parliament Can Play a Revolutionary Part in the Transition to Socialism and the Role of the Popular Masses.”

The uncovered paper with commentary has since been published several times in English as a book under the title And Not a Shot Is Fired.  In his introduction to the American edition, John Howland Snow explained that the Kozak document is a blueprint for how a “representative government can be made authoritarian, legally, piece by piece. The form remains, an empty shell…. And not a shot is fired.”  (The complete RWU press edition is available online at www.robertwelchuniversity.org)

Freedom First Society published this summary of Kozak’s “revolutionary parliamentarianism” in its booklet The Marxist Attack on the Middle Class, (pp. 36, 37):

Revolutionary Parliamentarianism (a fancy name for the “pincers strategy”). This is a technique for driving change through a national legislature by applying “pressure from above and pressure from below.” Agents of the Conspiracy, using their influence with ostensibly independent grassroots organizations will stage protests and demonstrations demanding that the government take a particular revolutionary action. Other agents in government will introduce a measure claiming it is in response to popular demand. Their measure will be supported at the top by business leaders, think tanks, and scholars. The twin pressures are applied to other legislators making it difficult for them to say no.

The “Climate Change” Pretext
There are many fine books exposing the phony science and claims of the global-warming scaremongers as well as the serious consequences if they should have their way completely. However, most Americans don’t want to take a position on scientific disputes, phony or otherwise.   And the most serious consequence, loss of American freedom, has nothing to do with the science of climate change, anyway.

Unfortunately, many responsible Americans are neutralized by media casting the battle as a mere partisan dispute over science.   And so these Americans never get to join the real battle. Yet they are desperately needed to help bypass the Establishment media and share the evidence, such as Masters of Deception, of high-level corruption in support of a subversive campaign that threatens our freedom.  So please share this post widely.