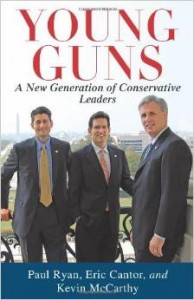 In our review of Young Guns, we pointed out serious deficiencies in the program championed by these three Republicans, who misleadingly claimed to support the principles of our nation’s Founders.

As the 115th Congress convenes in January of 2017, Paul Ryan (R-Wis.) has been re-elected as the Speaker of the House and Kevin McCarthy (R-Calif.) continues to serve as House Majority Leader, having filled that position following the upset defeat of their mutual colleague, Virginia Rep. Eric Cantor, in 2014.

To better understand those holding the reins of power in the House today, we urge visitors to read our 2012 Review and share a link to this page with friends and associates.