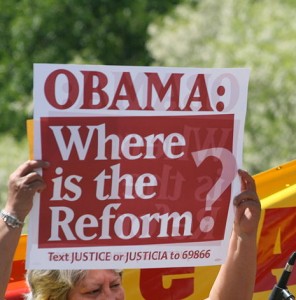 The House measure was a response to President Obama’s November 20th televised address in which he announced that he would act unilaterally to “fix” America’s “broken immigration system” — because Congress hadn’t done so.

Of course, this GOP attempt to nullify the president’s outrageous usurpation of the legislative function was destined to go nowhere, and everybody knew it. But, as with so many roll calls, the primary purpose was to allow GOP House members to go on record as objecting to the president’s action.

Accordingly, we did not score the House GOP for their easy posturing “yea” votes, but we give credit to the three Democrats who broke with their party’s leadership and stood for the Constitution.

However, America’s immigration problem is serious, and the partisan posturing over the president’s executive orders obscures a much more important reality — the Establishment’s decades-old support for the open borders movement.