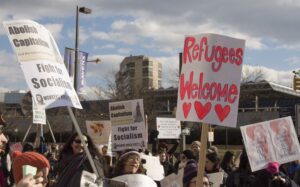 To solve the immigration problem, we must first understand why it exists. And that requires digging deeper than just blaming desperate foreigners for crossing our borders illegally in search of a better life. Indeed, the real reason why both illegal and legal immigration are out of control is because it serves an influential cabal targeting our freedom. And only Congress, under pressure from an informed electorate, can stop the betrayal.

Massive immigration that does not assimilate subverts our culture — the culture that supports freedom. This is not racism or xenophobia. It was the attitude of America’s founders.

In his report on immigration to the First Congress, James Madison urged that America “welcome every person of good fame [who] really means to incorporate himself into our society, but repel all who will not be a real addition to the wealth and strength of the United States.”

Alexander Hamilton argued that our goal should be “to render the people of this country as homogeneous as possible” as that “must tend as much as any other circumstance to the permanency of their union and prosperity.”

Immigrants who do not assimilate create conflict in society (useful to would-be totalitarians), or in Hamilton’s words: “In the composition of society, the harmony of ingredients is all-important, and whatever tends to a discordant intermixture must have an injurious tendency.”

With today’s massive government welfare extended to illegal immigrants, the economic strain undermines the middle class, another bulwark of freedom. The welfare magnet should not be underestimated. In the early part of the previous century, the absence of a welfare state made assimilation a necessity. Indeed, many immigrants returned to their native lands when they couldn’t make it here in the work force.

Then, of course, the criminal element, terrorists, and drugs coming across our porous southern border help to destabilize society. In particular, smuggled heroin fuels the opioid epidemic, which serves the goals of those seeking authoritarian government and a submissive population.

The Insiders of an organized Conspiracy have supported specific programs that have led to America’s immigration crisis. For example, politicians carrying out the Insiders’ agenda have encouraged illegal immigration by extending government welfare to illegals and promoting amnesty. They have also undermined border enforcement by refusing to adequately fund the border patrol or even repair fences.

These Insiders have supported socialism and conflict around the world, also encouraging illegal immigration. And wars and pogroms by totalitarian regimes, whose birth can be credited to the Insiders, create pressure on America (and European nations) to accept refugees.   In addition to the sheer numbers of immigrants, several Establishment-promoted programs (see below) serve to discourage assimilation.

For decades, Robert L. Bartley, a member of the Council on Foreign Relations (CFR), used his position as editorial page editor of the Wall Street Journal to influence conservative readers, arguing that the nation-state was finished and that America should have open borders.

Insiders have promoted hemispheric integration via NAFTA and the Free Trade Area of the Americas. In May 2005, just a few years after the 9-11 attacks, the CFR’s “Independent Task Force on the Future of North America” issued its report, “Building a North American Community.” The report proposed a North American Security Perimeter as a substitute for enforcing national borders. 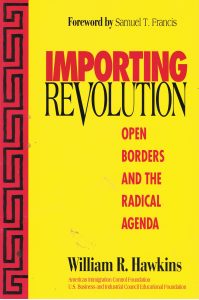 The radical immigrants’ rights organizations also subvert border enforcement, in particular by challenging deportations in court. But these organizations didn’t just spring up by themselves, they had Establishment funding, most notably from the Ford Foundation.

It is inexcusable today for any competent reporter to allow “advocacy groups” to posture as genuine grassroots defenders of Latino interests. By the mid-1990s resistance groups compiled several studies exposing the fraud.   In 1994, for example, the American Immigration Control Foundation published Importing Revolution: Open Borders and the Radical Agenda by William R. Hawkins, providing much of the background and history of MALDEF (the Mexican American Legal Defense and Education Fund).

By examining the flow of funds, one quickly discovers that the Ford Foundation virtually created the radical Chicano movement, which seeks open borders, uncontrolled immigration from Mexico, and the de facto reconquest by Mexico of the Southwest portion of the United States (termed Atzlan by the radicals). (Note: Ford Foundation subversion was uncovered by the Reece Committee, going way back to the 1950s, but that story has long been forgotten.)

In 1995, syndicated columnist Georgie Ann Geyer wrote Americans No More: The Death of Citizenship.   Her book should have been a wake-up call, as it included admissions against interest by someone with both radical liberal and Establishment credentials.   Georgie Ann Geyer was (and still is) a member of the Council on Foreign Relations and an open disciple of the late Marxist and radical organizer Saul Alinsky. Let’s see what Geyer had to say.

Geyer’s book described how radicals were following the strategy of infiltration advocated by Italian Communist Antonio Gramsci to render impotent every tenet of our culture. Geyer claims that, in pursuit of this strategy, Marxists have infected “American universities, unions, churches, bureaucracies, and corporations…. Three whole generations, often its best students and thinkers and even labor leaders, were formed with a Marxist component to their thoughts and actions, often without even knowing it.” 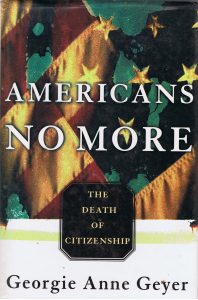 Americans No More didn’t just focus on the visible activists.   Geyer documented how Insider tax-exempt foundations had helped to create ethnic grievance groups. She even provided personal testimony. In the early 1980s, Geyer met with “two representatives of one of the major and supposedly representative ‘Hispanic’ groups, the National Council of La Raza.” When Geyer asked, “How many members do you have?,” one of the representatives admitted, “Well, we don’t have members.”

An incredulous Geyer demanded to know how an organization without members could fund and support its activities. The representatives replied, almost in unison, “The Ford Foundation!” As Geyer tells the story: “The two smiled as though they did not have a care in the world, and, indeed, financially, they did not. To promote and push through their programs and policies, they needed no elections, no campaign strategies, and none of that bothersome business of fund-raising or member-seeking. At the same time, of course, they basically suffered accountability neither to disparate sources of funding nor to the fickle interests of individuals.” With such support, La Raza could boast 150 organizations in 36 states!

Legal aid organizations, immigrants’ rights groups, and radical churches have widely distributed “The Bill of Rights for the Undocumented Worker.” Article VII demands: “Every immigrant worker shall be guaranteed the same rights enjoyed by U.S. citizens, especially the right of access to free and adequate social and health services, child-care and other similar social benefits.” And Article VIII states: “Every immigrant worker shall have the right to quality public education in his or her native language….”

Establishment Foundations and the federal government have also aggressively promoted “multiculturalism” as the new American ethic.  Students in schools everywhere are being hammered with the idea that all cultures, even the most primitive, are equally enriching for our nation and must be given equal treatment.

Three decades ago (1988), The New American magazine tried to sound the alarm:

“Invasion. That’s what we are witnessing: an ongoing invasion that has been escalating for over a decade. Each day, at hundreds of points along our southern border, thousands of people from countries all over the world are entering the United States illegally…. [Even with meager resources], for six years running the Border Patrol has apprehended well over one million illegal aliens per year…. A visible effect of our uncontrolled immigration is what is increasingly referred to as the ‘Third World colonization’ of the United States. Large sections of major U.S. cities now resemble Mexico City, San Salvador, Bombay, and Calcutta — with tens of thousands of people living in cardboard and tin shanties, or sleeping in the streets.”

By 1996, the Sacramento Bee reported: “Nearly one in four students in California’s public schools — more than 1.25 million kids — understands little or no English.”

Legislation promoted by liberal politicians implementing the Insiders’ agenda inspired much of the invasion. Senators Robert F. and Edward Kennedy supported the Immigration Reform Act of 1965. The new priorities in our immigration law would emphasize “our obligation” to the rest of the world.

But the subversion didn’t stop there. When President Carter couldn’t get Congress to provide amnesty for illegal immigrants, he created a commission headed by Reverend Theodore Hesburgh (CFR and fellow Trilateralist) to study the problem and make recommendations. The recommendations were incorporated into the 1986 Immigration Reform and Control Act (IRCA).

IRCA was sold to the public as a “solution” to our immigration problem, but it had the opposite effect. Granting amnesty to millions of illegal aliens simply emboldened millions more to violate our borders in hopes of similar amnesties. And those who became citizens took advantage of the liberalization of the law re chain migration.

Steps to a Solution

The initial step must be to create recognition among a wider audience of why immigration is out of control and why Washington currently will frustrate any real solution. That requires exposing conspiratorial influence, objectives, and actions, along with highlighting the refusal of politicians and the controlled media to expose the domestic subversion. An expensive Southern wall provides no defense against the subversion from within.

At the same time, that understanding must be turned into effective action. What is needed is informed and organized public pressure on Congress — pressure to stop the betrayal and protect our heritage. In the face of conspiratorial inroads and influence today, these steps require the right organization and leadership — may we dare say, a much larger Freedom First Society?