It’s NOT a Democrat Problem! 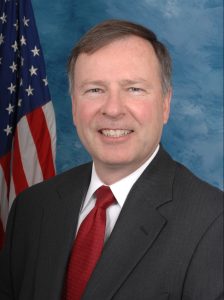 A July 24, 2020 release from Rep. Doug Lamborn (R-Colo. 05) explains why he voted against a Democrat-inspired appropriations minibus.  In fact, no Republicans voted for it.

With his release, Rep. Lamborn perpetuates a common but insidious Republican deception that our nation’s problems are due to those awful Democrats.   That line ignores GOP culpability and says the significant problem Americans should be concerned about is simply the partisan struggle between Republicans and Democrats.

But this focus on the sins of Democrats is a horrible illusion that is deceiving many conservative Americans into relying on equally culpable Republicans to put our nation on track.  In reality, Republicans, as we shall argue, are very much a part of our problem, too.

Rep. Lamborn’s release is short.  We repeat it all here, interspersed by much needed rebuttal:

“This is simply no way to govern.  The bills in today’s minibus spend billions of dollars beyond what the current budget agreement allows.”

Freedom First Society:   However, recent budget agreements are not the standard to which legislation should adhere.  The standard should be what the Constitution allows.  Realistically, the vast majority of budgeted spending is for unconstitutional programs and departments, which desperately need to be rolled back and eliminated.   Americans should not allow the two parties to simply agree on how much more unconstitutional spending to add to the mix.

“Today’s legislation prohibits funds from being used for a border wall, overturns the Mexico City Policy which will allow foreign organizations to receive federal funds even if they perform abortions, restricts oil and gas production, and provides $500 million for international climate funds. This legislation has no serious chance of becoming law and is being used only to message to their socialist base.”

Freedom First Society:  Much that Congress votes on has no chance of becoming law but is designed merely to impress constituents (messaging).  Republicans are not exempt.

“Even more concerning is the fiscal insanity prevalent in the Democratic party in Washington. We have spent more than $6 trillion dollars in coronavirus aid, yet Democrats think we can continue to recklessly spend money.

“We cannot continue to saddle future generations with debt.”

Freedom First Society:   Congress has been spending recklessly for decades, so why expect it to stop now?  That’s how our national debt has grown to top an incomprehensible $26 trillion.  Here’s Rep. Lamborn’s solution:

“We must find bipartisan consensus and work to cut wasteful spending.”

Freedom First Society:   Absolutely NOT!  If the Democrats are generally as fiscally irresponsible as Rep. Lamborn indicates, and they are, then the last thing America needs is a compromise with big spenders.  America needs a new breed of congressmen, irrespective of party, who steadfastly refuse to compromise on their oath to defend the Constitution.

Lamborn also pushes here a particularly damaging illusion.   Our massive debt, as well as bloated government, is NOT due to “wasteful spending.”  No, massive unconstitutional spending, not waste, is destroying America’s opportunity and, if continued, will rob us of our freedom.   And that foundation of unconstitutional spending is supported by an overwhelming majority of Republicans, who conveniently focus on a few examples of waste and posture as opposing excessive increases.

Indeed, wasteful spending is inevitable when government has grown beyond the point where Congress can manage it.  What is needed is backbone in Congress, supplied by informed and activated constituents, to start phasing out unconstitutional departments and programs, returning the federal government to just its constitutionally assigned mission.  It can and must be done!

Restore Regular Order.
There is another serious deficiency in Lamborn’s release.   He fails to attack the minibus for its violation of regular order (i.e., separate votes on the 12 independent appropriations bills).

The continuing damaging procedure of voting on several independent bills amassed into one bill, on a take it or leave it basis, supports big spending.   Grouping several bills together into a minibus or omnibus allows congressmen to argue that they had to support the bad in order not to reject the good.  In fact, many bad features and poison pills slipped in by congressional leadership get approved in this way.

Neither principled congressmen nor the public need accept this violation of regular order.  In leading up to the above minibus, the House staged votes on more than 100 amendments.  There was certainly time to have voted separately on each of the four appropriations bills in the minibus.   A tough, constitutionalist Senate or President would refuse to accept a minibus or omnibus.

Judge Them by Their Record
Americans cannot judge the performance of their Congressmen by just relying on their tough talk.  As the saying goes, “talk is cheap.”

What Americans need in order to evaluate the actual performance of their congressmen is a reliable scorecard on how they vote.  Fortunately, there is one at hand:  The Freedom First Society “Congressional Scorecard” is designed to help Americans force Congress to return the federal government to its constitutional limits.

In selecting votes to score, we avoid the many posturing measures and slam-dunk party-line votes that come before Congress and instead look for the tough votes that separate the congressmen who vote according to the Constitution from those who don’t.  Measured against the clear language of the Constitution, the great majority of what the federal government does today is unconstitutional.

Lamborn Not Alone
Rep. Lamborn is not alone in blaming Democrats for our problems and fueling the partisan deception.  Of course, during campaign season it’s expected that a candidate will run against opponents — but not against an entire party.

Indeed, conservatives need to understand the lie in the implied claim that merely electing Republicans will in any way solve our nation’s problems.  Both parties are giving us socialism.  Often, the Democrats lead the assault in one area and the Republicans in another (e.g., Republicans gave us the breakthrough in federal aid to education and delivered the crucial votes for U.S. membership in the Internationalists’ World Trade Organization and NAFTA.)

Here are excerpts from several recent GOP campaign messages, with links to the congressman’s FFS scorecard:

Rep. Devin Nunes (R-Calif. 22) (7-21-20): “The Democrats are destroying our cities and promoting lawlessness and anarchy nationwide. On top of that, they want to defund our police.”

House Minority Leader Kevin McCarthy (R-Calif. 23) (7-25-20): “Over the past few weeks, we’ve seen countless mobs destroy our cities, harm our police officers, and disrupt law and order. The kicker is that they’re supported by the Democrats in Congress.”

Senator Martha McSally (R-Ariz.) (7-24-20): “The far left wants to eliminate the Senate filibuster. That means if they gain just 4 seats in the Senate, there will be no way for Republicans to stop their radical agenda. They’re going to steamroll Americans to appease their leftist base.”

Rep. Jim Jordan (R-Ohio 04) (7-23-20): “Adam Schiff and Nancy Pelosi and the rest of the radical, unhinged Democrats got what they have wanted since November 2016.  They undermined our democracy in January by voting to impeach President Trump – our duly elected president who 63 MILLION Americans voted for!”

Senator Joni Ernst (R-Iowa) (7-21-20): “The Democrats aren’t fighting to put America first. They’re more focused on electing their hand-picked candidates — so much so that they’re willing to tear down Republican women for their appearance, block Conservative efforts to create sensible police reform, and even play games with economic relief for small businesses and middle-class families during a pandemic.  The America that the radical Left is fighting for is NOT the America I believe in and it’s up to us to fight back.”

In fact, in response to the recent city riots, President Trump echoed the same theme on July 20 that America’s principal problem is Democrats: “Look at what’s going on. Run by Democrats. All run by very liberal Democrats. All run really by radical left.”

Bipartisan Subversion
The massive unconstitutional federal monster has been created and nourished over decades by Republicans and Democrats alike.  Democrats are often portrayed as wolves, while most Republicans have become wolves in sheep’s clothing.  But remember that both are wolves.

Moreover, the wolf in sheep’s clothing is actually the more dangerous, as that wolf can sneak up on you and devour you.

No, America is NOT suffering from a Democrat problem.  It is being victimized by a Conspiracy, a Conspiracy that has corrupted both parties and targets our freedom.  That’s the understanding that must be communicated to more Americans, and it is the mission of Freedom First Society to do so.  But we need more help.  So, we respectfully invite you to join our organization.

One response to “It’s NOT a Democrat Problem!”

The Marxist Attack on the Middle Class (audiobook)$free