In a Nutshell, the Case Against a Con-con 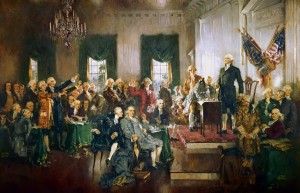 The burden of proof should surely be on the proponents of a major undertaking of this sort, which, though described in the Constitution, has yet to occur in our entire history. Instead, they lobby largely outside the public view for their unprecedented “solution” and seek no debate. All the more then, do we as opponents of an Article 5 “Con-con” need to identify and understand the principal objections, to help us carry the issue.

Alright, then, what is fundamentally wrong with the Article V Con-con push?

Let’s start with the alleged benefits of holding an “A5C” (Article V Con-con). The notion most successfully selling state legislatures on an A5C is the idea that THIS is the key to reigning in that out-of-control monster, our federal government. There are even claims that this part of Article V was put into the Constitution precisely as the solution that states might bring into service, like pulling a rabbit out of a hat, should the federal government ever exceed its constitutional bounds.

Yet, almost everything the A5C proponents consider a transgression on the part of the federal government (e.g., spending to bust the budget), and that they claim an amendment would fix, is something the Constitution already outlaws! If the government were obeying NOW the clear mandates of the Constitution, none of these problems would be plaguing us!

Changing the Constitution is the wrong solution to an enforcement problem. The Constitution itself was designed to be, and explicitly portrays itself as, the chains for binding down the federal government.

Of course, we cannot just dismiss it as impossible, that some such amendment might have a beneficial effect. But the suggestion that legislators who disobey large swaths of the Constitution will somehow behave better when faced with an amendment, ought to have the burden of proof. Yet which of the A5C supporters has ever tried to prove this?

The “term limits” Con-con call is somewhat different: Instead of suggesting amendments are magically stronger than the Constitution itself, it suggests that Congress-persons who can run for re-election only so many times will magically behave better than those who can run any number of times. But folk who understand the meaning of “lame duck session” know that congress-people not subject to the ballot box are less likely to behave!

Not every call for an A5C claims, necessarily, that it will save us from government’s bursting of constitutional bounds. But every such call feels an obligation to downplay costs or risks that an A5C may present. And here, we shall see, is where proponents out-do themselves in making up fantastic claims.

Proponents want to sell us the line that it is possible to put constraints, ahead of time, on an Article V constitutional convention — so that it will only consider certain topics, and perhaps only follow certain procedures. Yet, as Don Fotheringham explains so clearly and documents so tellingly, in America, the people, not legislatures, are sovereign — over constitutions as well as over governments. “We the People” wrote the Constitution; and that is who will propose amendments to it, or even total rewrites of it, if an Article V constitutional convention occurs.

Is that not what happens in every state today, when a state-constitutional convention is called? This popular-sovereignty principle is built into, not only the Preamble of our current Constitution, but also the very Declaration of Independence that brought the United States into being:

We hold these Truths to be self-evident … [t]hat to secure these rights, Governments are instituted among Men, deriving their just Powers from the Consent of the Governed. That whenever any Form of Government becomes destructive of these Ends, it is the Right of the People to alter or to abolish it, and to institute new Government, laying its Foundation on such Principles, and organizing its Powers in such Forms, as to them shall seem most likely to effect their Safety and Happiness.

The one historic example we have for a constitutional convention at the federal level, was the one that produced our current Constitution. For proponents of another federal convention, then, it is quite embarrassing that writing a new constitution was not what that first convention’s delegates were sent there to do: they were merely to discuss, debate, and possibly propose some amendments to the then-current Articles of Confederation. But, as James Madison emphasized, the delegates represented the People of the United States — not the state legislatures — and therefore they had autonomy from all legislatures, whether state or federal, in determining the scope as well as the rules of their convention.

So, as Don Fotheringham emphasizes, every state legislator needs to be aware that the same popular sovereignty that applies to any state-constitutional convention these days, would apply also if we should ever have another federal constitutional convention. And that convention would therefore be no more under the control of either Congress or the state legislatures than was that 1787 Convention, which providentially gave us a far more perfect constitution than any convention could be expected to compose today in an environment dominated by pro-Big government media.

One objection that arises at this point sounds reasonable, until you think about it: Since around two-thirds of the state legislatures are dominated by Republicans — goes the claim — we can rest assured that no radical proposal that does away with the Second Amendment, say, or rewrites the whole Constitution, will be ratified by three fourths of the legislatures.

However, there are two false assumptions here: First, the objection overlooks that a constitutional convention has authority, not only to set its own rules, but also to rewrite the rules of how its proposals are to be ratified. The Constitutional Convention of 1787 did exactly that; if it had not, it would have been harder to get our present Constitution ratified!

But even if the A5C resists the temptation to change the ratification rules, that leaves us with the rules laid down in Article V. And there, Congress can choose either of two routes: ratification “by the legislatures of three-fourths of the several States, or by conventions in three-fourths thereof.”

As an example that proves how dangerous and uncontrollable the second route is, Utah, the most pro-Prohibition state in the union, ratified the amendment that repealed Prohibition! Conventions, whether state or federal, are innately uncontrollable creatures; and thus, special interests may easily “hijack” them for purposes the People oppose.

For more support, see our “Expose the Article V Con-con Fraud”  campaign page, particularly the opinions of constitutional experts. Useful also, if confronting abusive, ad hominem arguments from the proponents, is an excellent recent piece by Wynne Coleman, of “No Convention of States NC,” on the growing use of such tactics. (Also, see the Heckler-Levin video rant linked therein.)

One response to “In a Nutshell, the Case Against a Con-con”