Freedom First Society is particularly guided by the insights and experience of Robert Welch, as reflected in his writings and speeches.

The following short biography of Robert Welch is taken from Organize for Victory!

On the Shoulders of a Giant — Robert Welch

“How often has public calamity been arrested on the very brink of ruin by the seasonable energy of a single man?… [o]ne vigorous mind without office, without situation, without public function of any kind… I say, one such man, confiding in the aid of God, and full of just reliance on his own fortitude, vigor, enterprise, and perseverance, would first draw to him some few like himself, and then that multitudes, hardly thought to be in existence, would appear and troop about him.” — Edmund Burke1

It is not surprising that a biographer of Robert Welch would choose the above words of an 18th Century British statesman to introduce his work. Edmund Burke’s optimism seems as though it were written to describe Mr. Welch’s leadership in the freedom fight.

Robert Welch became most widely known for the organization he founded when he was 59 years old. But most of that attention came from those who supported what was happening to America and who were willing to distort the truth to stop what Mr. Welch was trying to do. Because of the strategy of his enemies to make him and his organization appear ridiculous, the public at large never had the opportunity to appreciate the stature of the man. 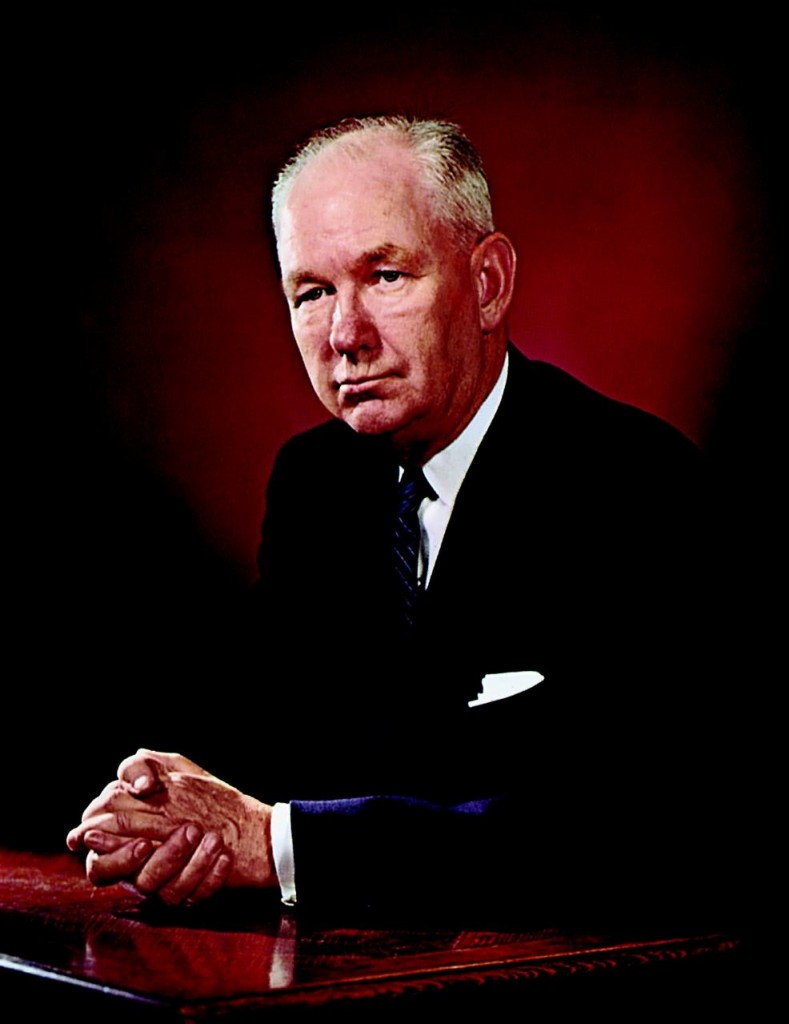 However, by age 59, Robert Welch had already amassed a substantial positive reputation and circle of influence, or he never would have been able to achieve the impact he did in so short a period of time thereafter…. Later, one of his colleagues in the freedom fight, the much admired American poet and essayist E. Merrill Root, would write the following about his friend:

“As you meet him in his quiet office at Belmont, or as you see him in public at a meeting or a John Birch Society dinner, you feel a power. It is not what we call today ‘charisma.’… It is a quiet power. It affirms and insists, through convictions, through an amazing knowledge, through a goodness and integrity that seem almost to be tangible. It is not oratory. He is not a spell-binder. He writes clearly, often brilliantly or eloquently; he writes better than he speaks. Yet somehow, something fundamental in the mind and the man, a grasp of things as they are, a sincerity and integrity flow out of him and into his audience. His power lies in his goodness and his truth. I have felt this, I have seen this, and I bear sober witness to it.”2

Fortunately for the country he loved, Robert Welch was a rare combination of scholar, businessman, and leader. He was also a genius with integrity and devotion to duty. Brilliance is common, but brilliance with absolute integrity and successful accomplishment in the world of affairs is very unusual.

But perhaps what set him so far apart from many of his contemporaries was that he took pains to understand what had to be done and then stepped forward and did it. He didn’t just complain about the problem or dabble in a solution. When he finally saw clearly what had to be done, he committed his entire life to it.

That attitude was reflected in a poem he wrote decades earlier at age 20, entitled “At Twenty”:

If, fifty years from now, when I survey
The scanty roll of things that I have done,
I find a score of visions unfulfilled
And victories I dreamed of still unwon,
I’ll doubtless see mistakes that I have made
And places where I lost because I picked
the losing side;
But not a failure shall I find
In the trail I’ve left behind,
Where I might have won but didn’t, just because
I never tried.3

Robert Welch was born in 1899 on a farm in North Carolina. In his early years and through most of grade school, Robert Welch was homeschooled by his mother, Lina Welch. Young Robert was an exceptionally gifted student, and his mother encouraged him to use his intellectual gifts in what became a love affair with knowledge.

By age six Robert was proficient in elementary algebra. At age seven, he began the study of Latin. During the summer that year he read nine volumes of Ridpath’s History of the World and thus began his love for history. At age 12 he won a DAR essay contest dealing with North Carolina history.

Robert graduated from the University of North Carolina at the unusual age of 16. He entered Annapolis at age 17 with a college degree for a brief, two-year Naval career (after two years he ranked fourth in a class of nearly one thousand cadets). By age 20 he had become a syndicated columnist of sorts with four substantial newspapers running his commentaries on the news in verse. And then he entered Harvard Law School.

Frustrated with the socialist views of one of his professors — future Supreme Court Justice Felix Frankfurter — Robert resigned from law school after two years to become an entrepreneur in the candy business.

As a successful businessman, Robert Welch became involved in the National Association of Manufacturers (NAM) and through that connection developed a friendship with a number of prominent business leaders. For seven years Mr. Welch served as a member of the board of directors of NAM and for three years as a regional vice president.

For two years, Mr. Welch functioned as the energetic chairman of the Educational Advisory Committee of NAM. In that capacity, he came in contact with leading educators. For most of those two years he chaired bimonthly meetings across the country on the state of American education. Out of these discussions came a 32-page brochure widely distributed by NAM entitled This We Believe About Education.

The level of personal influence Mr. Welch achieved can be seen by the caliber of the men who respected him. When he formed the Council of The John Birch Society in early 1960, he invited a couple dozen men to serve on that body — all with character, but some especially influential in their own right.

Here is a list of some of the notable figures who accepted Mr. Welch’s invitation to serve on the initial Council. Most had been close personal friends of Mr. Welch for many years.

Getting Ready for the Fight Ahead

Mr. Welch’s political philosophy and concerns regarding current affairs developed at an early age. About 1934 he wrote an unpublished essay entitled “A Weight On My Shoulders,” which included these thoughts:

“The glory that is passing in the America that I was born in; that was given to me by courageous and far-seeing men, many of whom died for that purpose; that I grew up in, went to school in, and loved more every year as I came to understand what a miraculous achievement it was as compared with any other social group at any place or any time in the history of the world;… my America is being made over into a carbon copy of thousands of despotisms that have gone before.”5

Mr. Welch felt a personal obligation to do what he could to pass on America’s heritage of freedom to future generations. Following World War II, he began speaking publicly before groups on contemporary issues.

He also traveled extensively. Those travels included “two trips to England specifically to study the effects of the Socialist government; one trip round the world; and fairly extensive additional traveling in North America, South America, Europe, and Asia.”6

During those trips he got to know world leaders such as Syngman Rhee, president of Korea, and Conrad Adenauer, chancellor of West Germany. Twice he met with China’s Chiang Kai-shek. Following his 1955 visit to South Korea, President Rhee wrote him, “I must confess I did not know we had such a staunch ally and champion as you in America.”

Robert Welch had published articles since he was 20. As an illustration of the diversity of his interests, in 1945 he published a children’s book, The Barnyard News. But his writing soon took a more serious turn.

In 1951, Mr. Welch began giving a short speech entitled “Acheson and MacArthur” regarding our treacherous foreign policy in the Far East that helped betray China into Communist hands. The speech created quite a stir.

Henry Regnery got wind of the speech and suggested to Mr. Welch that they publish it as a book. Mr. Welch agreed and it became, with some enlargement, May God Forgive Us! General Albert C. Wedemeyer, who had commanded all American forces in China during some of the period described in the book, stated that it was “the most comprehensive and objective treatment of the complex situation in the Far East that I have read.”7

Other books with significant reach and impact would follow. In 1954, Regnery published Mr. Welch’s story of U.S. Army hero John Birch. Captain Birch was brutally murdered by our supposed allies the Red Chinese, while on a peaceful reconnaissance mission in Army uniform immediately following the end of World War II. The facts surrounding his murder were suppressed, even from John’s parents, by a U.S. State Department eager to help the Red Chinese maintain a benign image before the American public.

Mr. Welch uncovered the story while “[a]ll alone, in a committee room of the Senate Office Building… reading the dry typewritten pages in an unpublished report of an almost forgotten congressional committee hearing.”8

In 1956, Mr. Welch launched One Man’s Opinion, a magazine that shortly became American Opinion, when he invited others to contribute. The reach and respect of this publication grew as he assembled an impressive stable of writers and led his publication to take a hard-line in defense of Americanism and in exposing the Communist/collectivist conspiracy’s influence on current events.

“As of January 1, 1957, Mr. Welch gave up most of his business responsibilities — and most of his income — in order to devote practically all of his time and energy to the anti-Communist cause.”9 Out of these efforts came his plans to launch a new organization to fill a vacuum of leadership in the freedom fight.

Mr. Welch had become increasingly involved in researching the causes of America’s problems and in working to inform the American public. He even sought to increase his reach by campaigning as a candidate in the Republican primary for Lieutenant Governor of Massachusetts. But he eventually realized that our nation’s course would not be changed by giving speeches, publishing a magazine, or even attaining high political office. Something more was needed. And Robert Welch was determined to fill that need.

So in December of 1958, he called together a group of prominent men for a two-day meeting during which he analyzed America’s problems and outlined his plans for a new organization — The John Birch Society. Mr. Welch had no intention of just adding another voice of opposition to the collectivist advance. He meant business every step of the way, and the goal he sought was victory.

While at the helm of that organization for a quarter of a century, Mr. Welch attracted and inspired those closest to him and a growing membership — “that multitudes, hardly thought to be in existence” — through his leadership in the monthly Bulletin.

Although the story of those battles is not directly the subject of this book, much of Mr. Welch’s leadership and wisdom imparted through those battles is. So the reader will find pieces of that story interspersed through the book’s chapters. And Chapter 13, The Principal Challenge: Building Organization, particularly examines the challenges and successes of The John Birch Society under Mr. Welch’s leadership.

The Marxist Attack on the Middle Class (audiobook)$free