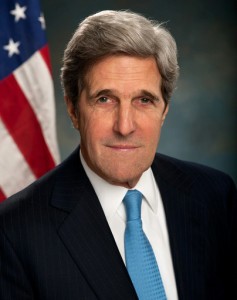 “Former Secretary of State John Kerry swiped at President Trump while voicing concerns about the effects of global climate change on U.S. national security during an appearance Wednesday on Capitol Hill…. [Kerry told lawmakers:] ‘Each day that we fail to act on climate change, we are risking the health and security of future generations.’

“The former Obama Cabinet members [Kerry and former Defense Secretary Chuck Hagel] also took aim at Trump’s plan to form a committee to re-evaluate the scientific consensus surrounding climate change, with Kerry referring to the plan as ‘a scheme to pretend there are two sides to an issue long since settled.’” — The Hill, 4-9-19

Climate “scientist” John Kerry was following in the footsteps of “Internet inventor” Al Gore, whose claims about man-made global warming were portrayed in the film “An Inconvenient Truth.”

Scam on Display at 1992 Earth Summit
While we don’t claim to be experts on weather and climate factors, we do understand the power grab the alarmists are seeking to justify. The 1992 Earth Summit in Rio de Janerio (officially the United Nations Conference on Environment and Development – UNCED) provided a great window into that deception.

“First, we must recognize that the environmental movement is not about facts or logic. More and more it is becoming clear that those who support the so-called ‘New World Order’ or World Government under the United Nations have adopted global environmentalism as a basis for the dissolution of independent nations and the international realignment of power.”

A Common Revolutionary Tactic
The incessant climate change warnings also follow the tactic famously used by totalitarians — repeat a lie often enough so that the people accept it as the truth.

One of the environmentalist lies is that there is a consensus among knowledgeable scientists that man-made climate change is a serious threat to mankind.  Dr. Richard Lindzen, now retired from MIT, is one renowned environmental scientist who doesn’t agree.   Last year, he debunked the hysteria in a lecture: “Global Warming and the Two Cultures.” (A link to his lecture, can be found in our website post “UN Climate Change Hysteria.”)

You don’t have to look far to find repetitions of the alarm.  For example, during the April 8th House “debate” over the “Local Water Protection Act,” Texas Congresswoman Sheila Jackson Lee stated:

“As an Energy and Environment Task Force Co-Chair of the Congressional Black Caucus, I understand the necessity of this bill and its funding to managing sources of water pollution…. The strain on the marine life is not the only adverse effect to nature, global warming is also worsened when we turn a cheek to decreasing the pollution of our waterways…. Mr. Speaker, we must not wait to take action when the health of our marine life, the state of Global Warming, and the health of our people are being affected.” [Emphasis added.]

One response to “Repeat a Lie Often Enough …”