While the freshman class of the 112th Congress undoubtedly offers good opportunities to build a Congress that adheres to the Constitution, don’t expect the current GOP House leaders to blaze that trail. 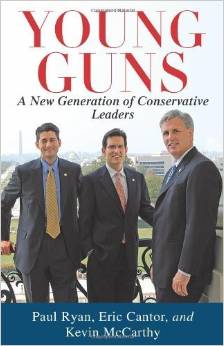 In previous FFS Action Reports, we examined the track record of Speaker of the House John Boehner, in particular his alliance with ultra-leftist George Miller (D-Calif.) to help fasten the “No Child Left Behind Act” on America. But voters need to be aware of another force with influence over this year’s freshmen: the GOP’s Young Guns Program, which helped a number of freshmen in this and the prior Congress get elected.

The Young Guns website (www.gopyoungguns.com) describes the program’s origins: “Founded in the 2007-2008 election cycle … the Young Guns Program began as a Member driven organization of House Republicans dedicated to identifying, recruiting, and mobilizing a new generation of conservative leaders.” With the early success of the program, it was adopted by the NRCC “as the candidate recruitment and training program for House Republicans….”

Last year, Cantor, Ryan, and McCarthy published Young Guns: A New Generation of Conservative Leaders promoting their leadership and commitment to principle and arguing why their program provides the best opportunity for moving America in the right direction.

Young Guns admits that the GOP had strayed from its principles: “We’ve seen Republicans who claim to believe in limited government spend the taxpayers’ money like teenagers with the parents’ credit card….” Partly because of such “admissions,” many uninformed readers will undoubtedly regard the three authors as sincere reformers.

However, the plan outlined in Young Guns for restoring America to its founding principles (and “changing the face of the Republican Party”) has two serious flaws:

First, in their message to America, Ryan, Cantor, and McCarthy totally mislead their readers as to the depth of the problem America faces.

Indeed, Young Guns would have the reader believe that the source of America’s problem is no bigger than a difference in viewpoints and commitment between the two major parties and a failure of past GOP leadership to stay true to traditional GOP principles. So it is no surprise that the thrust of the book is that the solution to America’s ills is partisan political.

Again, no surprise, the three young GOP leaders say nothing about the Conspiracy’s domination of the major opinion-forming institutions, which mischaracterize problems, political solutions, and leaders for busy Americans. Yet it is extremely naive to imagine that internationalism and Big Brother government can be rolled back, while the enemy controls the media of communication.

Nor do Cantor, Ryan, and McCarthy express any concern over the literally thousands of left-wing, socialist organizations that draw sustenance from the federal trough and seek influence over policy, while mainstream America must try to be heard in Congress in its spare time and with after-tax dollars.

Certainly, Young Guns offers no hint that the American people need to be better informed before they will reliably support right-acting politicians and prudent programs. Nor could we find any suggestion that the people may have been intentionally dumbed down. And of course, there is no mention of a Conspiracy that has a grip on both major parties and the presidency, including serious presidential contenders.

As an example of understating the problem, consider this argument by Eric Cantor (p. 34):

Or this statement by Kevin McCarthy: “Under Republican leadership in the early 2000s, spending and government got out of control.” No, Mr. McCarthy, government and spending have been out of control since at least the administrations of FDR. And there is a reason why both parties have cooperated over the years in building a federal monster, while ignoring constitutional limits. It’s called Conspiracy.

The second major flaw in the Young Guns’ message is its acceptance of the socialist usurpations of previous administrations (from FDR to Lyndon Johnson), referring to them as America’s social safety net.

In his foreword to Young Guns, Fred Barnes, executive editor of the Weekly Standard (and former senior editor and White House correspondent for The New Republic) characterizes Paul Ryan as “the most influential Republican thinker in Congress.” (Indeed, Ryan was selected to deliver the GOP rebuttal to President Obama’s State of the Union address in January of this year.)

Accordingly, let’s look to Paul Ryan’s section of the book to see what principles the three believe the GOP should champion:

On page 133, we are heartened to find this affirmation: “[Eric, Kevin, and I] have a deep attachment and enduring faith in our Constitution and the principles of freedom that were given to us by our Founders.” Earlier, however, Ryan misstates those principles:

“[M]y plan [The Patients’ Choice Act] unapologetically seeks to apply our nation’s timeless principles — our Founders’ commitment to individual liberty, limited government, and free enterprise — to today’s challenges. It does so in a way that honors our historic commitment to strengthening the social safety net for those who need it most…. It fixes what is broken in our health-care system without breaking what is working.” [Emphasis ours.]

On page 93, Ryan describes his “Roadmap for America’s Future of 2008” (H.R. 6110) as “a detailed blueprint for how we can bring spending under control, secure the future of Social Security and Medicare, and reclaim the American idea.”

Or consider Ryan’s analysis of the options facing America:

“Choice number two [our choice] is a very different future. Imagine your family working, paying its bills, and enjoying a government that respects your work by allowing you to keep more of what you earn. If you’re out of work, dynamic, results-based job training is available…. If you lose your income because times get tough, a safety net is there to provide health care for you and your family.” [Emphasis ours.]

America’s Founders never envisioned any such role for the Federal government! The Constitution they created was based on the principle of federalism — with only a very narrow, limited, albeit important, role assigned to the Federal government. Indeed, the principles enshrined in America’s Founding documents did help immensely to launch America on its path to greatness.

However, these three politicians, who now sit atop the House GOP’s leadership, seem to recognize that few Americans today will hold them to account for misrepresenting America’s founding principles. Even though most Americans hold our Constitution in high esteem, few, unfortunately, really understand the principles contained therein or how far government has departed from those principles. Helping to re-establish that understanding is a good part of the reason why Freedom First Society was formed.