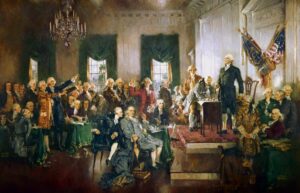 America's Founders intended for the Electoral College to choose our nation's president and vice president.

The NPV (National Popular Vote) Compact has just hit a large bump in its road to “bypass the Electoral College.” On August 20, the Tenth Circuit Court of Appeals rescued that College from two centuries of distortion and misuse.  And by doing so, the court handed us a very big club with which to bludgeon the NPV campaign.

The NPV Compact is, in fact, a fine example of the abuse which this ruling calls on the carpet: By signing onto the NPV compact, a state agrees to coerce its presidential electors to vote a certain way — namely, for the party-ticket that won the national popular vote. Such coercion overthrows the whole purpose of the presidential-election system the Constitution outlines — commonly called the “Electoral College.” (See our earlier post, “Democracy, Tyranny, and the NPV Compact.”) The Constitution created the position of presidential elector in order that presidents (and vice-presidents) would be chosen by the considered, uncoerced discretion of people considered capable of choosing the candidates wisely.

The problem with the way the Electoral College has been working for two centuries is that most states’ laws have already, by various means, been putting heavy pressure on the state’s presidential “electors” to vote the way the state legislature wants them to — which is usually, to support the party-ticket which won the state’s popular vote. And the Tenth Circuit Court has now called “unconstitutional” the coercion of electors — or, to be specific, states’ punishing or removing the elector, or interfering with the (Constitutional) processing of the votes, when an elector casts any such (so-called) anomalous vote.

Remarkably, this “long train of abuses” has never been treated by the Supreme Court. Apparently that is because no state has ever actually carried out the prosecution of a so-called faithless elector, nor actually removed and replaced him or her, for any of the several historical “anomalous” votes — not until the State of Colorado did it in 2016.  It is ironic that the Colorado legislature signed onto the NPV compact, and yet — by trying to remove a “faithless” elector and to interfere with his vote — Colorado’s Secretary of State had already handed the federal courts a case by which they could address the whole issue.

Plaintiffs v. Colorado Secretary of State
The Tenth Circuit Court did address the issue; and we can give thanks that they handled it masterfully! The court concluded: “Article II and the Twelfth Amendment provide presidential electors the right to cast a vote for President and Vice President with discretion. And the state does not possess countervailing authority to remove an elector and to cancel his vote in response to the exercise of that Constitutional right.” (pp. 112–13)

But if the court’s conclusion is correct (and indeed, it is), then the whole NPV program, which is dependent on states’ passing laws that coerce the electors to vote a certain way, is — now officially— unconstitutional!  As reported by the Colorado Sun, current Colorado Secretary of State Jena Griswold, who seems shocked by the ruling, “said that since the 10th Circuit’s ruling says that Colorado law cannot compel an elector to vote one way or the other, the national popular vote compact’s mandates could be ignored under the decision. She reiterated, however, that she’s optimistic a remedy can be found before that situation would ever arise and her office is still reviewing the long, complex ruling to understand its impact.”

Given the Tenth Circuit’s watertight ruling, the “remedy” Secretary Griswold hopes for seems unlikely to appear, even if the case goes to the Supreme Court. Those battling the NPV have a major weapon now. Even states that have signed onto the NPV should repudiate their acceptance of it, given the Tenth Court’s demolition of their authority to enforce any such law.