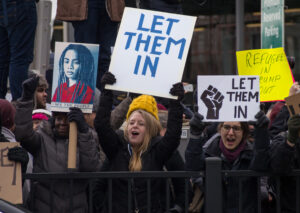 It is doubtful whether any of us has ever seen such an audacious judicial usurpation, or one with such serious ramifications, as the decision of federal courts to interrupt President Trump’s temporary travel ban.

Settled case law for 200 years, not to mention the Constitution, says that the Congress and executive branch can regulate immigration in any way and to any extent they please; it is therefore NOT a sort of law upon which judges can bring “judicial review”!

In an article for Conservative Review, Daniel Horowitz, author of Stolen Sovereignty, provides overwhelming arguments as to why this is so.

If there remains ANY doubt on the settled nature of this legal point, this list of 16 quotations Daniel Horowitz has just culled from his research should settle the issue. In particular, we draw attention to quotes 10 and 11:

“The power of Congress to exclude aliens altogether from the United States, or to prescribe the terms and conditions upon which they may come to this country, and to have its declared policy in that regard enforced exclusively through executive officers, without judicial intervention, is settled by our previous adjudications.” [Lem Moon Sing v. United States, 158 U. S. 547 (1895)]

“[T]he decision to admit or to exclude an alien may be lawfully placed with the [p]resident, who may in turn delegate the carrying out of this function to a responsible executive officer … The action of the executive officer under such authority is final and conclusive. Whatever the rule may be concerning deportation of persons who have gained entry into the United States, it is not within the province of any court, unless expressly authorized by law, to review the determination of the political branch of the Government to exclude a given alien.” [Knauff v. Shaughnessy, 338 U.S. 543 (1950)]

It will be a disaster if the Trump administration and the “conservative” media accept this perversion of judicial authority. Consider, for example, this less than encouraging response by Vice President Mike Pence to a question as to whether the judge also had the authority to stay the order:

“He certainly does, and that’s why the administration is complying with that order as we speak. And we’ll go through the process in the courts to get a stay of that order, so that, again, we can implement this action that is entirely focused on the safety and security of the American people.” — “Pence Defends Trump ‘Speaking His Mind’ About Federal Judge, Promises ‘All Legal Means’ to Challenge Ruling,” — abcnews (2-14-17)