The Court’s Strange Argument in Obergefell 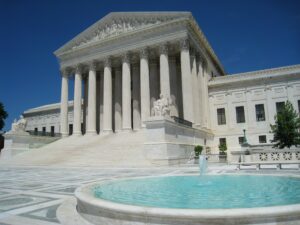 Same-sex-marriage supporters had generally expected the Supreme Court to pursue in Obergefell v. Hodges the line of argument usually taken in same-sex marriage cases that had been brought in state courts. That line was based on the Fourteenth Amendment’s “equal protection” clause, which forbids every state to “deny to any person within its jurisdiction the equal protection of the laws.”

The contention was that, given this clause, marriage laws should not treat heterosexual couples any differently than they treat homosexual couples. (One writer distinguished between this line of argument and that of “non-discrimination.” But since “equality” under the law implies non-discrimination in the application of the laws, most writers treated these two as basically the same argument.)

As at least one writer mentioned, the majority in Obergefell did vaguely “nod to” this previous line of argument. For example, the majority framed the situation thus in the Syllabus (i.e., summary) of their opinion: “The marriage laws at issue are in essence unequal: Same-sex couples are denied benefits afforded opposite-sex couples and are barred from exercising a fundamental right.”

But their “nod” to equality seemed to be more or less window dressing for the real argument. As Chief Justice Roberts writes,

And anyway, in retrospect it is clear that that to use “equality” as a serious line of argument would have failed spectacularly. That becomes obvious from a reading of the four dissenting justices’ opinions.

One reason it would have failed is that non-discrimination or equality of access to certain legal benefits that the government has attached to marriage, though potentially an issue, was not what the petitioners were asking for: again to quote Chief Justice Roberts,

It is important to note with precision which laws petitioners have challenged. Although they discuss some of the ancillary legal benefits that accompany marriage, such as hospital visitation rights and recognition of spousal status on official documents, petitioners’ lawsuits target the laws defining marriage generally rather than those allocating benefits specifically. The equal protection analysis might be different, in my view, if we were confronted with a more focused challenge to the denial of certain tangible benefits.

A second reason for it to fail is that the idea of non-discriminatory application of laws of marriage, as that had been argued (successfully) in a number of “right to marry” cases, cannot apply to same-sex couples, because, as Roberts points out, they all had to do with “marriage” as traditionally defined:

In short, the “right to marry” cases stand for the important but limited proposition that particular restrictions on access to marriage as traditionally defined violate due process.

A third reason for the “equality” line of argument to fail is that it could be possible to argue that same-sex couples did not have equal treatment under the marriage laws – and thus did not have equal access to its benefits – but only if the argument assumed the radically altered definition of marriage which was, in effect, what the petitioners were requesting. But in that case, the majority would clearly be arguing in a circle – which is a well-known type of fallacy.

Justice Alito saw this difficulty clearly (interpolations and emphasis ours):

Attempting to circumvent the problem presented by the newness of the [same-sex marriage] right found in these [recent state-level] cases, the majority claims that the issue is the right to equal treatment. Noting that marriage is a fundamental right, the majority argues that a State has no valid reason for denying that right to same-sex couples. This reasoning is dependent upon a particular understanding of the purpose of civil marriage. Although the Court expresses the point in loftier terms, its argument is that the fundamental pur­pose of marriage is to promote the well-being of those who choose to marry. Marriage provides emotional fulfillment and the promise of support in times of need. And by benefiting persons who choose to wed, marriage indirectly benefits society because persons who live in stable, fulfilling, and supportive relationships make better citizens. It is for these reasons, the argument goes, that States encourage and formalize marriage, confer special benefits on married persons, and also impose some special obligations. This understanding of the States’ reasons for recognizing marriage enables the majority to argue that same-sex marriage serves the States’ objectives in the same way as opposite-sex marriage.

This understanding of marriage, which focuses almost entirely on the happiness of persons who choose to marry, is shared by many people today, but it is not the traditional one. For millennia, marriage was inextricably linked to the one thing that only an opposite-sex couple can do: procreate.1

Thus, the openly circular nature of the only “equal protection” argument they could have offered, made it inadvisable to use that line of argument at all seriously. The majority needed another main argument – or at least, one that would take the lion’s share of the scrutiny, so people wouldn’t notice the obvious weakness in the “equality” argument.

Switch to Plan B

What they did was bring in the idea of a “fundamental right to dignity”. It could hardly be denied, after all, that same-sex couples might feel deprived of dignity if not given access to marriage.

To find that “right” in the Constitution, the majority invoked the Fourteenth Amendment’s “due process” clause, interpreted as guaranteeing “substantive due process.” We wrote about “substantive due process” in our article about the idea of a “living” Constitution. This specious and empty concept, which has given rise to many federal court cases, was well summed up by Justice Scalia in his dissenting opinion in Obergefell: “It stands for nothing whatever, except those freedoms and entitlements that this Court really likes.” It is thus just a blank check for judicial activism.

Though on the surface this seems a dubious change of tactics, at least a couple of scholars had noticed its potential, and already written journal articles in favor of it. Interestingly, these writers seem to be not only of a more scholarly ilk, but also more interested in tactics and bringing about radical change, than in same-sex couples’ felt need for “dignity” or “equality.”

Consider for example this abstract (summary) of a May 2012 journal article by Peter Odell Campbell:

This essay discusses Justice Anthony M. Kennedy’s choice to foreground arguments from due process rather than equal protection in the majority opinion in Lawrence v. Texas. Kennedy’s choice can realize constitutional legal doctrine that is more consistent with radical queer politics than arguments from equal protection. Unlike some recent critiques of Kennedy’s opinion, a queer rhetorical analysis of Lawrence reveals a futuristic, always-open-to-change vision in Kennedy’s rhetorical framing of constitutional law that is significantly less damaging to possibilities for “queer world making” in the United States than other contemporary US judicial arguments of and about sexuality.

For “futuristic, always-open-to-change vision” we can read, “such a vague notion of ‘due process’ it can never be pinned down or refuted.” But note especially the author’s dominant interest in “radical queer politics” and “‘queer world making’.” (The above article is entitled, “The Procedural Queer: Substantive Due Process, Lawrence v. Texas, and Queer Rhetorical Futures.”)

Another scholarly article, by Douglas NeJaime, appeared in The Yale Law Journal in Sept. 2013, with more reserved language than the one just cited but with apparently the same, mainly tactical motivation. It approved thoroughly Kennedy’s continuation, in United States v. Windsor (2013, striking down the Defense Of Marriage Act), of the “substantive due process” approach to gay rights that he had first displayed in Lawrence (2003). And the article seemed very optimistic that this approach would be a powerful one in future, same-sex-marriage cases.

The Subtle Fallacy in the “Substantive Due Process” Approach

But in this argument, the fallacy is that the meaning of that key term is altered in the course of the argument. Such a key term’s meaning-change within an argument is called “equivocation” – another well-known type of logical fallacy.

The argument goes like this, after all: “The laws at issue have kept these petitioners out of the marriage bond. But marriage is a right that is so fundamental it should be available to all couples, regardless of gender. So, those laws should be thrown out.”

This fallacy of equivocation would more likely have been noticed, if the “equality” issue had not been invoked also and claimed as relevant. So that is probably why the majority brought it up. By mentioning both lines of argument, and claiming a close connection between them, they used each one as an effective smokescreen for the (otherwise more obvious) fallacy in the other.

Note 1: To give the Devil his due, the majority did actually – in one place and in a seemingly token gesture (three sentences long) – argue that for all those millennia, the concept of marriage was really not “inextricably linked” to the idea of procreation. In short, the definition of marriage as only between people of opposite genders does not accurately define the essence of the age-old concept! The true meaning of marriage is no less applicable to homosexual couples! Here is their entire argument (pp. 15-16 in their opinion, emphasis ours):

That is not to say the right to marry is less meaningful for those who do not or cannot have children. An ability, desire, or promise to procreate is not and has not been a prerequisite for a valid marriage in any State. In light of precedent protecting the right of a married couple not to procreate, it cannot be said the Court or the States have conditioned the right to marry on the capacity or commitment to procreate. The constitutional marriage right has many aspects, of which childbearing is only one.

So, all judges down through the millennia stand corrected! But unsurprisingly, the audacious, little argument is fallacious: it attacks a “straw man”, i.e. a position its opponents do not really hold. It assumes, falsely, that the traditional definition of marriage entails “an ability, desire, or promise to procreate.” But in Justice Alito’s paragraph next after those just quoted, he states the traditional position more accurately (emphasis ours):

Adherents to different schools of philosophy use different terms to explain why society should formalize marriage and attach special benefits and obligations to persons who marry. Here, the States defending their adherence to the traditional understanding of marriage have explained their position using the pragmatic vocabulary that characterizes most American political discourse. Their basic argument is that States formalize and promote marriage, unlike other fulfilling human relationships, in order to encourage potentially procreative conduct to take place within a lasting unit that has long been thought to provide the best atmosphere for raising children. They thus argue that there are reasonable secular grounds for restricting marriage to opposite-sex couples.