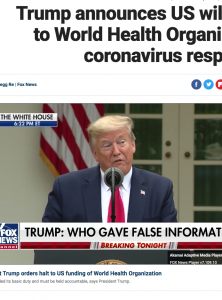 President Donald Trump announced Tuesday [4-15] he is halting funding to the World Health Organization while a review is conducted.

Trump said the review would cover the WHO’s “role in severely mismanaging and covering up the spread of coronavirus.” [Emphasis added.]  — CNN.com (4-15-20)

President Trump’s announcement unleashed a firestorm of media and partisan controversy.  As so often, the controversy mimicked the entertaining hype for a professional wrestling match, an exaggerated conflict between two sides, while covering up the reality that freedom is the loser regardless of the outcome. (A month later, on May 29 (left), he announced a decision to terminate funding unconditionally.)

On the one side, the President’s supporters piled on with the complaints about W.H.O. and how it needed to be reformed.   Fox News analyst Gordon C. Chiang argued:

The president’s action is the first step needed to spark meaningful reform of the United Nations organization and the global health architecture.  — “Trump right to stop funding World Health Organization over its botched coronavirus response,” foxnews.com, 4-14-20

On the other side, the President’s opponents claimed that the timing in the middle of a pandemic was irresponsible, as the world depended so much on the great work of W.H.O.  This criticism by Nicholas Kristof, a member of the world-government promoting Council on Foreign Relations, is hardly surprising:

Trump’s announcement that he is halting American funding for the W.H.O. just as the world is facing a raging pandemic is a dangerous attempt to find a scapegoat for his own failings. It is like taking away a fire department’s trucks in the middle of a blaze. — “Trump’s Deadly Search for a Scapegoat,” New York Times, 4-15-20

But both the pro- and anti-W.H.O. positions serve to keep Americans unaware of the real looming Internationalist threat of which W.H.O. is just one part.  Indeed, W.H.O.’s overriding mission, as one of the UN’s system of agencies, is to convince the world that the solution to global problems lies in giving more power to Insider-controlled institutions.

The President’s criticism, however, is the most damaging because he enjoys an undeserved conservative image.  His criticism reinforces the deadly deception regarding the positive purpose of these institutions, while ignoring their subversive designs by those with a grip on Washington. It is, therefore, horribly misleading.

Moreover, calls for reform of the World Health Organization serve to cover up its subversive origins and purpose.  Indeed, the demand for reforms has long been a useful Internationalist Establishment tactic for deflecting serious opposition.   In particular, conservative demands for the U.S. to withdraw from the UN have repeatedly been deflected by Establishment calls for reform — which go nowhere, of course.

W.H.O.’s Subversive Origins and Purpose
So what is being covered up about the origins and purpose of the UN and its agencies? 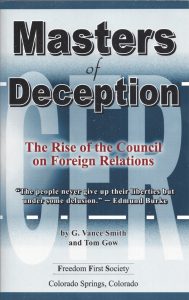 Let’s start by recalling that the leading figure at the UN’s founding conference was secret Soviet agent Alger Hiss, later convicted of perjury and sentenced to prison.  We recorded the media-suppressed background to these organizations in Masters of Deception – The Rise of the Council on Foreign Relations [CFR]:

In April of 1945, the founding conference for the UN began in San Francisco, lasting into June (Japan did not surrender until August).  Alger Hiss served as the acting secretary-general of the conference, helping to finalize the UN Charter. Time magazine commented in advance of the conference: “As secretary-general, managing the agenda, [Hiss] will have a lot to say behind the scenes about who gets the breaks.”…

We do not mean to suggest that the CFR leaders were in any way snookered, or even surprised, by the Soviet agents in their midst. The San Francisco conference was almost entirely a CFR show.  More than 40 of the American delegates to the San Francisco conference were or would later become CFR members, only a portion of whom would subsequently be identified as Communists.  Among the Establishment CFR members present were Isaiah Bowman (founding CFR member); Nelson Rockefeller; future Secretary of State John Foster Dulles (founding CFR member); and John J. McCloy (future chairman of the CFR).

A few years later, in 1952, Senator James O. Eastland, the Chairman of the U.S. Senate Judiciary Committee, would charge:  “[T]here is today in the UN among the American employees there, the greatest concentration of Communists that this Committee has ever encountered.” And, of course the employees from the Communist bloc nations were Communist.  So, it shouldn’t have been surprising to find the UN and its agencies working an anti-freedom agenda.

And now, Republican voices, such as Nikki Haley, President Trump’s former ambassador to the UN, are conveniently directing attention away from the continuing role of US Insiders, claiming that we need to curtail Communist China’s influence.  And many GOP congressmen have adopted the focus on China as a useful reelection strategy.

However, US Insiders played a key role in betraying our former ally the Republic of China (Taiwan) and bringing Mao Tse Tung to power in China.  In consolidating his tyranny, Mao would liquidate millions of Chinese. Trilateralist and David Rockefeller protégé President Jimmy Carter would abrogate our treaty with Taiwan and recognize and support instead Communist China. And US Insiders, such as President Trump’s friend Henry Kissinger, would work to build Red China into a World Power.

So it’s really no surprise that Communist China has had great influence in the W.H.O.  Indeed, China’s influence is by design and addressing the resulting problems is a distraction.  The real focus should be on the designers — the global tyranny-promoting Internationalists who created the UN and have solidified their grip on our government.

And that is also the focus of this post.  But for those readers who would like more of the story of the perfidy surrounding this incredible deception, please read on.

W.H.O. got underway in 1948.  On its 10th anniversary, J.B. Matthews, a former research director for congressional committees investigating communism in America, surveyed W.H.O.’s beginnings in an article for the May 1958 issue of American Opinion magazine:

WHO’s Constitution opens with a statement that nine “principles are basic to the happiness, harmonious relations and security of all peoples.” They are listed as follows:

“Health is a state of complete physical, mental and social wellbeing and not merely the absence of disease or infirmity.

“The enjoyment of the highest attainable standard of health is one of the fundamental rights of every human being without distinction of race, religion, political belief, economic or social condition.

“The health of all peoples is fundamental to the attainment of peace and security and is dependent upon the fullest co-operation of individuals and States.

“The achievement of any State in the promotion and protection of health is of value to all.

“Unequal development in different countries in the promotion of health and control of disease, especially communicable disease, is a common danger.

“Healthy development of the child is of basic importance; the ability to live harmoniously in a changing total environment is essential to such development.

“The extension to all peoples of the benefits of medical, psychological and related knowledge is essential to the fullest attainment of health.

“Informed opinion and active cooperation on the part of the public are of the utmost importance in the improvement of the health of the people.

“Governments have a responsibility for the health of their peoples which can be fulfilled only by the provision of adequate health and social measures.”

Before commenting on the extraordinary nature of this set of basic principles, it will be pertinent to call attention to a booklet of the Carnegie Endowment for International Peace which praised the World Health Organization. Published on the eve of the formal launching of WHO, this booklet’s preface, written by none other than Mr. Alger Hiss, contained the following statement: “The new specialized agency carries on one of the most successful parts of the work of the League of Nations. The Constitution of the World Health Organization, however, has a far wider basis than that established for the League organization, and embodies in its provisions the broadest principles in public health service to day. Defining health as ‘a state of complete physical, mental, and social wellbeing, and not merely the absence of disease or infirmity’, it includes not only the more conventional fields of activity but also mental health, housing, nutrition, economic or working conditions, and administrative and social techniques affecting public health.”

It would be difficult to imagine any area of human thought or activity— private or public, individual or collective—not covered by the definition of health set forth in WHO’s Constitution….

Brock Chisholm [the first Director-General of the World Health Organization (1948–1953) and later awarded “Humanist of the Year,” (1959) by the American Humanist Association] …  wrote as follows: “History is studded with critical dates —wars, invasions, revolutions, discoveries, peace treaties—that are firmly implanted in our minds…. This document [WHO’s Constitution] may well go down in history as one of the most far-reaching of all international agreements…. The World Health Organization is a positive creative force with broad objectives, reaching forward to embrace nearly all levels of human activity.”

Dr. Brock Chisholm, who had more than anyone else to do with the writing of WHO’s Constitution, has explained that the aforementioned provisions of Chapter IV incorporated a “new principle of international law” by circumventing the usual procedures for the ratification of international conventions or agreements. The Member States, in ratifying WHO’s Constitution at the beginning of their membership in the organization, signed a blank check to be bound by such regulations as should be adopted by the World Health Assembly in the future unless they formally notified the Director-General of non-compliance. “The long, slow, and usually never completed process of ratification by each government of an international convention is thus avoided,” says Dr. Chisholm.

To conclude review of the development of W.H.O., we take a look at one of W.H.O.’s later director-generals, Gro Harlem Brundtland. Brundtlandt, the former socialist prime minister of Norway, was elected 1st Vice President of the Socialist International in 1992.  In 1998, W.H.O.’s governing body elected her as the director-general of W.H.O. for a five-year term.  But let’s back up.

Gro Harlem Brundtland has championed expanded UN authority in virtually all areas. At the 1992 UN Earth Summit in Rio de Janeiro, she argued that “the nation state is too small an arena for addressing regional and global challenges related to the environment and development.”

UN socialists, such as Brundtland, work comfortably with CFR leaders (e.g., Brundtland with Jeffrey Sachs (CFR)).  CFR leaders, the real architects of the UN, comfortably control their creation, while on the surface the UN pretends to be a democracy of nations.  But that is another story.

One response to “The W.H.O. Cover-up”