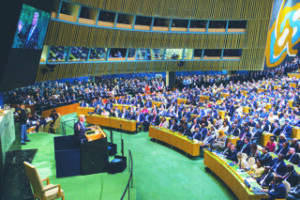 “This institution was founded in the aftermath of two world wars to help shape this better future. It was based on the vision that diverse nations could cooperate to protect their sovereignty, preserve their security, and promote their prosperity….

“[W]e helped build institutions such as this one to defend the sovereignty, security, and prosperity for all….”
— President Donald Trump, addressing the UN General Assembly, 9-19-17

Correction, Please! No, the UN is not about protecting national sovereignty. It is the very enemy of sovereignty.

The UN was created under false pretexts as a tool of Internationalist Insiders to build a totalitarian world government run by them. That evolutionary agenda is alive and well today.

In the April 1974 issue of Foreign Affairs, the journal of the Council on Foreign Relations (CFR), future Trilateralist Richard N. Gardner (CFR) openly admitted that world government was the objective of his fellow internationalists. But he endorsed the deception of the salami approach for destroying national sovereignty:

“In short, the ‘house of world order’ will have to be built from the bottom up rather than from the top down. It will look like a great ‘booming, buzzing, confusion,’ to use William James’ famous description of reality, but an end run around national sovereignty, eroding it piece by piece, will accomplish much more than the old-fashioned frontal assault.”

Part of the Internationalists’ long-term goal is to disarm the nations of the world, while arming the UN as a new superpower.

A document boldly describing the long-range program was issued by the Dean Rusk (CFR) State Department as Department of State Publication 7277. It carried the title Freedom From War: The United States Program for General and Complete Disarmament in a Peaceful World. President Kennedy presented it personally before the UN General Assembly on September 25th of that year (1961).

According to Freedom from War, the transfer of arms to the UN is to occur in three stages:

“In Stage III progressive controlled disarmament … would proceed to a point where no state would have the military power to challenge the progressively strengthened U.N. Peace Force.” [Emphasis added.]

When Stage III was fully implemented, the United States would be forced to comply with UN decisions, (i.e., decisions of the Council on Foreign Relations [CFR] oligarchy that designed the UN).

During that same period, the Kennedy State Department also contracted with the private Institute for Defense Analysis to prepare a classified study. In support of the study, a memorandum entitled A World Effectively Controlled By the United Nations candidly discussed the best strategy for establishing world government. The complete text of that shocking memorandum, authored by MIT professor Lincoln P. Bloomfield (CFR), appears as a “reference” on our website. (See “References” in our main menu)

“A world effectively controlled by the United Nations is one in which ‘world government’ would come about through the establishment of supranational institutions, characterized by mandatory universal membership and some ability to employ physical force. Effective control would thus entail a preponderance of political power in the hands of a supranational organization…. [T]he present UN Charter could theoretically be revised in order to erect such an organization equal to the task envisaged, thereby codifying a radical rearrangement of power in the world.”

Perhaps the most shocking is the claim in the memorandum is that the UN would need nuclear weapons to ensure world “peace”:

“The appropriate degree of relative force would, we conclude, involve total disarmament down to police and internal security levels for the constituent units, as against a significant conventional capability at the center backed by a marginally significant nuclear capability.” [Emphasis added.]

The argument of the UN founders that the UN would prevent wars and promote world peace is undermined by the fact that these Internationalists made sure that a cabal of criminal regimes, controlled by them, would dominate the UN Security Council and other UN institutions. So we have the “acceptable” criminals who are supposed to police the “rogue” criminals.

In addition, over many decades these Internationalist conspirators have persistently perverted U.S. power to undermine and betray regimes friendly to the U.S. and help totalitarians take over their nations.   China is a prime example, and we could list many others.

The Betrayal of China

At the end of July 1946, President Truman’s Chief of Staff, General George C. Marshall, clamped an embargo on the sale of arms and ammunition to our World War II ally Chiang Kai-shek. Marshall would boast: “As Chief of Staff I armed 39 anti-Communist divisions, now with a stroke of the pen I disarm them.” Stockpiles of arms on their way to Chiang were actually destroyed in India. Meanwhile, the Soviets equipped Communist Mao Tse-tung with vast stores of U.S. military supplies Truman had provided Stalin for the assault on Japan.

On January 25, 1949, John F. Kennedy, a young second-term congressman from Massachusetts, rose on the floor of the House of Representatives to protest the actions of his party’s president:

“Mr. Speaker, over this weekend we have learned the extent of the disaster that has befallen China and the United States. The responsibility for the failure of our foreign policy in the Far East rests squarely with the White House and the Department of State. The continued insistence that aid would not be forthcoming, unless a coalition government with the Communists were formed, was a crippling blow to the National Government.”

A few days later, he would summarize his protest in words that could be applied to the future handling of Vietnam: “What our young men had saved, our diplomats and our President have frittered away.”

What Representative Kennedy may not have understood at the time was that the betrayal of China was orchestrated by the Establishment he would later serve as president.

Professor R. J. Rummel of the University of Hawaii estimated the death toll from the resulting Chinese genocide conservatively at more than 35 million deaths — approximately one of every 20 Chinese.

The “unfortunate publicity” of Chinese troops mowing down student protestors in the 1989 Tiananmen Square massacre caused nary a blip in U.S.-Chinese relations.   Within a few weeks of that massacre, U.S. officials Lawrence Eagleburger (CFR, formerly of Kissinger Associates) and Brent Scowcroft (former chairman of the CFR’s membership committee) would travel to China to reassure the Chinese leaders of continued U.S.-Chinese relations.

Following General MacArthur’s brilliant Inchon Landing during the Korean War, U.S. led forces momentarily held the upper hand. Then the Red Chinese invaded Korea to protect the North Korean regime. They dared do so only because the Truman administration had prevented General MacArthur from taking out the Yalu river bridges.

So U.S. soldiers fought (and died against) the Communist Chinese, while carrying out a “police action” ordered by the UN.   And later these Red Chinese invaders would be rewarded with a seat on the UN Security Council, whose mission ostensibly is to police the world.

And the Trump administration would ask the Communist Chinese dictators for help in restraining North Korea. Yet, in his September 19, 2017 UN speech, President Trump protested a socialist dictatorship in Venezuela. Something smells!