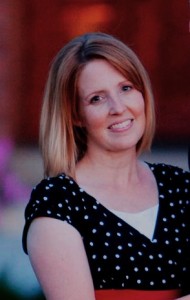 A talk by Mrs. Julianne Young delivered April 11, 2014 at a Freedom Rally in Pocatello, Idaho.

A cry jolts the still, sleepy morning to life. “There’s a skunk in the coop!” Dad scrambles for his gun, bed-heads crowd at the window, and bare feet streak across the dewy lawn. Dad cautiously peers ‘round the doorway while we all hold our breath. Two feathered friends lay dead in the straw with gaping, bloody wounds, while a dozen others mill about expressing their distress in a chickenish fashion, upset and oblivious all at once.

A white stripe shrinks into a dark corner where murderous, beady little eyes watch and wonder what we will do next. One chicken calmly saunters past the shadow, looking the skunk over quizzically.

That skunk will be hard to hit in the shadows. It will be him or Dad! Then—BLAM! BLAM! The skunk stirs and an acrid, skunky smell fills the air. One final BLAM! All is still. We run, choking and crying! But the chickens haven’t even noticed. They hop and pick their way through the carnage, gossiping and clucking.

A skunk lurks in society’s coop as well. He cowers in vague generalizations, rarely showing his true, deepest colors. His tidy fur coat and voluptuous tail proclaim world peace, prosperity for the masses, and personal fulfillment. He makes black, white, and white, black. He boldly invites all to embrace him, assuring us that his aims are irreproachable and mocking those who hesitate as old-fashioned, close-minded, naive, or bigoted. His odor permeates the media, our politically correct communications, and our public schools. He has been working, day and night, for decades in a deliberate and well-organized way to undermine God-given liberty and bring about a self-proclaimed silent revolution through “countless small adjustments.”

Many see troublesome symptoms and strut around expressing chickenish sentiments. They pick through the mess, decrying it— a rising divorce rate, fatherless children, STDs, lengthening prison roles, skyrocketing debts, a teetering national economy, illiterate high school graduates, and rampant drug and alcohol abuse. Others are too cauterized by their ball games, their entertainment, and the pursuit of the almighty dollar to notice that anything is happening at all. Surely, if they ignore it, it will go away. A third group calmly saunters up to the shadow, admiring its fierce, independent nature and the voluptuous coat they see there.

The skunk is real, and he is dangerous. His velvet coat is called humanism. His velvet claws are socialism or communism, which are “as alike as two peas in a pod.” He is not just another step in the political evolution of America, nor is the carnage about him the result of stupidity or clumsiness. He is cunning, consistent, well-organized, and deliberate. If you want to understand better what I am telling you pick up a copy of Vance Smith and Tom Gow’s well-documented book, Masters of Deception. There are copies at the Freedom First Society booth. The skunk’s self-declared intent is to destroy and devour, and as long as the chickens tolerate or ignore his presence, they are in great danger. Complacency and Compromise are the keys to our sure demise.

Wake up chickens! Stop picking through the carnage and open your eyes to the deliberate, organized, well-funded skunk. Stop giving him the authority to educate our chicks, provide for our physical needs, and dictate the future of our nation. Stop voting for skunks that don chicken headdresses and then vote for the conservative path to the destruction of our God-given, inspired Constitution.

That Constitution is our protection. It is the walls of our coop! It is a binding contract between God, the people of America, and those entrusted with public office. It means what it meant at the time we entered into it. No court on earth has the right to re-define the terms of that contract. Even the Supreme Court is inferior to the Constitution. It was not even a party to the initial contract and only exists under the authority of that sacred document. It is absurd to even suggest that a creation could be given the power to define their creator.

No politician on earth has the right to negate the provisions of the Constitution by supporting unconstitutional programs or policies. The Freedom First Society has put together an excellent online voter guide at freedomfirstsociety.org that assesses voting records, not by some conservative index, but based on the Constitution. This voter guide screens out posturing or party-line votes which mean nothing, but are often cast just to make a politician look a little more chickenish. It’s time we woke up to the reality that compromise is not a virtue when one is compromising away the lives, liberties, and properties of the American people, now and for generations to come.

Wake up little chickens! There is nothing a skunk fears more than truth. Get educated! Get organized! (The Freedom First Society has a great little book called Organize for Victory!) Take aim and FIRE!!! Sooner or later it will be the skunk or us. May God bless us with the wisdom to spot him, the courage to face him, and the ability to win. Thank you.

One response to “Wake Up, Little Chickens!”