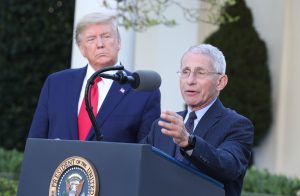 “President Donald Trump may want to reopen the U.S. economy by Easter — but the novel coronavirus wreaking havoc across the globe may have other plans.

“Dr. Anthony Fauci, the country’s top infectious disease expert, pointed out Wednesday that the virus is determining ‘the timeline’ for the pandemic.

“‘You’ve gotta be realistic,’ Fauci told CNN’s Chris Cuomo…. ‘You’ve got to understand that you don’t make the timeline, the virus makes the timeline….

“‘You can’t make an arbitrary decision until you see what you’re dealing with. You need the data.’” [Emphasis added.] — HuffPost, 3-26-20

Note:  On March 29, President Trump announced that he was extending the federal social distancing guidelines until April 30th.

Okay, Dr. Fauci, where’s the data?  I mean the data you used in the beginning to justify the unprecedented government decision to shutdown the economy?  Surely, you wouldn’t have accepted the notoriously unreliable Communist Chinese data?  Even the often quoted data from the UN’s World Health Organization can’t be trusted, because WHO has an agenda to reinforce the UN’s global power grab.

Indeed, where’s the data that the coronavirus is more deadly or more communicable than other infectious diseases that the world copes with every year without shutting down?  The American people deserve to know, particularly since the Internationalist Insiders dominating our government regularly use crises as pretexts for government to seize more unconstitutional power (see “Internationalist Treachery,” below).

According to Dr. Ron Paul, a former U.S. Representative, Fauci “testified to Congress that the death rate for the coronavirus is ten times that of the seasonal flu, a claim without any scientific basis.”

We hear statistics about number of cases and deaths, but how to those compare with say, the flu, or tuberculosis?  Most Americans can’t readily make the comparison, and many cases of such diseases go unreported.   (The CDC estimated that during the 2018-2019 flu season, the flu killed 34,200 of about 35.5 million people infected.)

Scaring Us
In a March 16th open letter, Dr. Paul further charged: “The chief fearmonger of the Trump Administration is without a doubt Anthony Fauci, head of the National Institute of Allergy and Infectious Diseases at the National Institutes of Health. Fauci is all over the media, serving up outright falsehoods to stir up even more panic.”

And the impact of that panic is everywhere.  Congress just passed a $2.2 trillion rescue package, which The Hill (3-25-20) claimed was “the single largest stimulus package in the nation’s history.”  And that may be only a beginning.

The ostensible justification for the enormous addition to the national debt was to stimulate an economy that is in recession, not because of the coronavirus directly, but because of governments’ (federal, state, & local) response, using the hyped scare as justification for the unprecedented assumption of power.  Only a lesser portion of the rescue package was devoted to defense against the virus itself.

On March 29th, Dr. Fauci ramped up his warning dramatically. According to The Hill:

“We’re going to have millions of cases,” Fauci, the head of the National Institute of Allergy and Infectious Diseases, said, noting that projections are subject to change, given that the disease’s outbreak is “such a moving target.”

Unfortunately, his projections seemed to have been based on computer models, which even Dr. Fauci admitted were no better than the assumptions fed into them.

Internationalist Treachery
In evaluating the crisis claims, we have a right to demand proof, because for decades Internationalists have been employing evolving threats and scares to gain power — leading to global power, accountable only to them.

With the start of the Cold War, the threat was nuclear annihilation.  But that shifted with the break-up of the former Soviet Union.   As replacements, the Internationalists embraced new threats — drugs, terrorism, and environmental catastrophe — as pretexts for increasing the authority of International bodies.

In its November 24, 1997 issue, The New American magazine warned that Internationalists had adopted another alarmist threat — pestilence — to accomplish their aims. The report was entitled “Scaring Us Toward Global Government.”  Remember that the following assessments were written two decades before the world heard of a “coronavirus pandemic:”

In recent years, yet another alarmist refrain has been heard: “World government or pestilence!” This latest crisis requiring global management is the threat presented by supposedly new infectious diseases. Where once we were menaced by megatons, the danger now supposedly comes from microbes — and familiar voices are insisting anew that only world government can save humanity from destruction.

As a tool for manipulating public opinion, the threat of pestilence actually has an advantage over the earlier scare scenarios: Nuclear annihilation of humanity, while a horrifying prospect, is simply too abstract to have a visceral impact. The same is true of environmental collapse. But everybody has been sick and can individualize the horror of succumbing to an incurable disease. Thus, the pestilence scenario may have far more potential as a tool for selling the public on globalist “solutions.”

The New American article cited a CISETP report as an example of “the willingness of public policy elites to play off media-generated fears of infectious disease.” According to the report:  “[Th]e past few years have been marked by a recognition of renewed vulnerability to infectious diseases. Bestselling books and Hollywood thrillers have triggered public fascination with ‘new,’ deadly, and unpredictable microorganisms.”  The New American continued:

The report noted that protecting the health of the “global village” demands “a worldwide response,” and “recently, public discussion has been further focused on the global issue of emerging diseases by … popular movies such as ‘Outbreak,’ starring Dustin Hoffman.”…

In the miniseries Pandora’s Clock, an airliner bound for JFK Airport in New York has the misfortune to be carrying a passenger infected with a doomsday virus. The plane is not allowed to land, lest the virus be loosed, and the government plans to shoot the plane down instead — another effective pitch for the idea that crises must be dealt with through extreme measures.

CISETP’s eagerness to cite Outbreak and similar entertainment products typifies a distressing willingness on the part of some public health officials to focus on lurid scenarios at some expense to sound science. The average American is largely at the mercy of domestic and international public health bureaucracies for information about infectious disease. This trust has been abused by public health authorities in recent decades.

But perhaps, this time, the Internationalists do have a real crisis to drive their power grabs.  Perhaps. However, we also know that with sufficient focus, the Establishment media can make any problem, such as “gun violence,” appear to be a new pandemic.  And there are several reports circulating claiming that the coronavirus statistics are exaggerated.

Data Alone Fallacy
Dr. Fauci’s claim that the virus data alone should drive government policy is a dangerous position.   In particular, his claim supports the Internationalist Establishment’s agenda for totalitarian power.  As several have pointed out, when the threat passes, government doesn’t give us our freedoms back.   It insists that an ongoing threat warrants that government retain the new authority. As an example, consider the “temporary” surveillance authorities granted to government following 9/11 by the Patriot Act, now the U.S.A. Freedom Act.

The coronavirus, even if it deserves major attention, is by no means the only problem the public faces.  Human mortality has not been conquered.  In the meantime, the public deserves the opportunity to try and accomplish life’s goals, protected by government, not burdened by government-imposed “emergency” restrictions.

But most significantly, the arguments in favor of the government measures ignore the much more dangerous threat of a high-level Internationalist Conspiracy that lusts to expand government authority in perpetuity and is greedy for useful pretexts.

So if these Conspiracy Insiders have their way, this scare is not a onetime event.  Indeed, Dr. Fauci has warned:  “We really need to be prepared for another cycle” to hit later this year.  And what about next year?

Multiple Gains
Establishment Internationalists are reaping multiple gains from their “crisis.”   Alexander Hamilton pointed to a principal one:

Safety from external danger is the most powerful director of national conduct. Even the ardent love of liberty will, after a time, give way to its dictates…. [T]he continual effort and alarm attendant on a state of continual danger, will compel nations the most attached to liberty to resort for repose and security to institutions which have a tendency to destroy their civil and political rights. To be more safe, they at length become willing to run the risk of being less free. — The Federalist No. 8

Hamilton’s warning is even more valid today, when there is a major organized Conspiracy for total power at work determined to undo the American revolution.  But in addition to preparing the public to give up its rights and accept government domination, the Conspiracy gains in other ways.

A primary Conspiracy gain is the enormous addition to our national debt from massive government spending — more than 2 trillion dollars the government does not have.  The consequences (inflation) and potential consequences (destruction of the dollar and its replacement with an International currency) are huge topics in themselves.  Bloomberg just reported (4-1-20):

The Federal Reserve is trying to call time on a fire sale of Treasuries by foreign governments and central banks.

Foreign official holders of Treasuries dumped more than $100 billion in the three weeks to March 25, on course for the biggest monthly drop on record, according to weekly Fed custody data that captures much of the pandemic-fueled turmoil.

Another gain by power seekers is the destruction of small businesses, a pillar of a free market economy and of the middle class — a bulwark of freedom.   Many other small businesses are to be put in hoc to the federal government.  In an interview with Yahoo! Finance (published 3-31-20) Ivanka Trump, President Trump’s daughter and senior advisor, made the following observation:

“Small businesses employ close to 50% of the American workforce, and obviously are the most vulnerable from a cash flow situation,” she said.

The $2 trillion fiscal stimulus sets aside over $350 billion in loans for small businesses. “We want to just bridge people until the world reopens,” she said.

And last, and very alarming, the Leftwing Politico reports that the Trump administration has asked Congress to draft legislation that would allow it to suspend parts of the Constitution:

The Justice Department has quietly asked Congress for the ability to ask chief judges to detain people indefinitely without trial during emergencies — part of a push for new powers that comes as the novel coronavirus spreads throughout the United States.

Documents reviewed by POLITICO detail the department’s requests to lawmakers on a host of topics, including the statute of limitations, asylum and the way court hearings are conducted  — “DOJ seeks new emergency powers amid coronavirus pandemic,” 3-21-20